UIU alumna, Betty Andres, class of 1946, provided the funds to bring 13 original outdoor sculptures to Fayette Campus. She met personally with each artist to select the most appropriate sculptures. 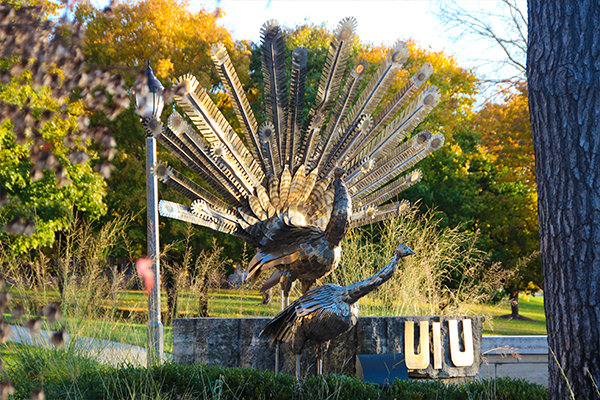 The Proud Peacocks and their base serve as a focal entrance to the north campus. The sculptor’s goal is to intrigue and delight with enduring texture, unlikely spatial relationships and fragile balance. He includes details such as wind direction and wildlife subjects responding to one another. His sculptures are designed to withstand the test of being viewed from every angle, giving new pleasure to the same audience at each viewing.

Presented to Upper Iowa Alumni in tribute to the fond memories of their years on this campus.

Jim Dolan has a Bachelor of Science Degree and Master of Science Degree from Montana State University and works with steel, stainless steel, brass, copper, aluminum and bronze. He creates his works with welding processes and casting. His subjects usually include wildlife, human figures and abstracts. He works in a small, life- size and monumental scale. 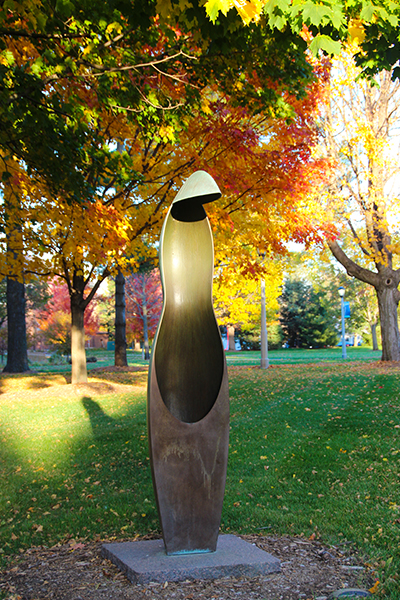 This sculpture presents a hollow shell that the viewer can seem to occupy. When viewed from different angles, its exterior form suggests both plant and animal, male and female. These changing aspects evoke the connection between ourselves and the natural world.

Presented to Upper Iowa University in honor of the work of Dr. Wilson C. Gill, professor of history and political science, registrar, and dean of men, 1947-1981. Grace, a bronze sculpture over four feet tall, is a positive gesture representing the human responses of the mind, the senses, the ego and the spirit. Like her sculpture, Wertheimer is constantly in motion, maintaining studios in Canada, Florida, and Italy.

Presented to Upper Iowa University in recognition of the dedicated service to UIU students of Dora F. Carter, librarian and alumni executive, 1916-1970. 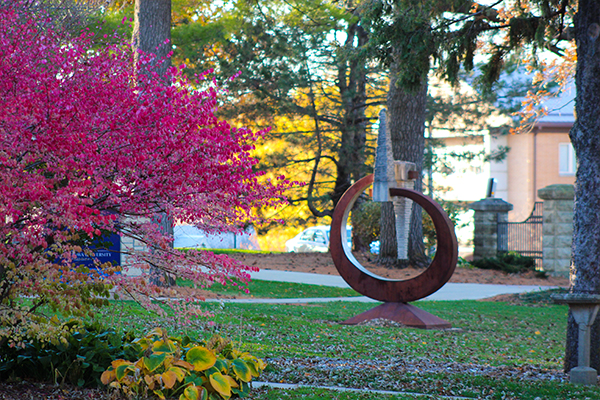 An exploration in visual tension and use of space, this sculpture offers the viewer tension and excitement, expanding from the basic circle into three-dimensionality. The sculptor has borrowed from the concept of pulling apart the coils of a spring to achieve this element. Materials used are steel, stainless steel, and limesone.

Dedicated to Walter Follett and his wife, Sophie- parents of Betty Follett Andres. Kevin Robb shapes pieces of steel into graceful forms, creating a work of art that brings a feeling of life and quiet energy to an outdoor space. A wonderful sense of intimacy is created with large, flowing shapes held firmly into positions that defy gravity. 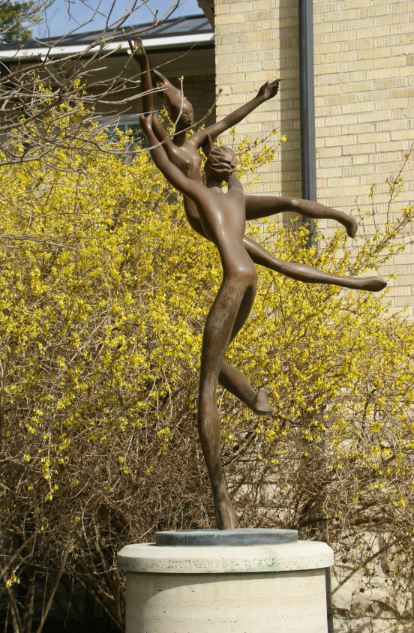 Wertheimer was inspired by the heartfelt love lines written by Dante Alighieri and dedicated to Francesca da Rimini. Both in print and in bronze, Alighieri’s compassion is demonstrated by placing the lovers in a whirlwind where they are together forever.

Presented to Upper Iowa University in recognition of the dedicated teaching of Ivadell F. Brause, professor of English and drama, and librarian, 1935-1965. 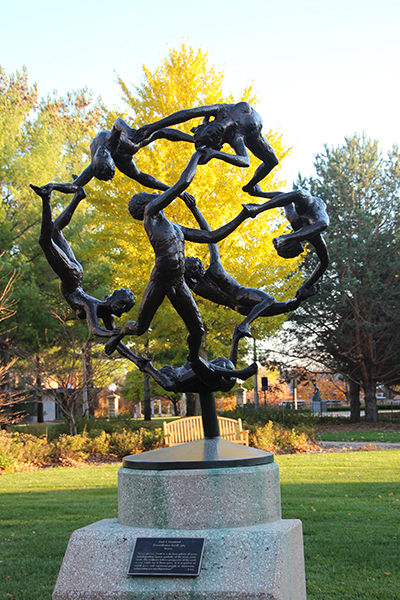 Constellation Earth is a six-foot sphere of seven interdependent figures, symbolic of the seven continents. This sculpture is the fourth in a series of five, the third casting being the first and only American sculpture to be placed in the World Peace Symbol Zone Peace Garden in Nagasaki, Japan.

Constellation Earth, the first sculpture in the Sculpture Education Program to be installed at Upper Iowa Universtiy, is located in the Sherer Spring Garden. The garden is dedicated to former UIU business professor Harvey C. Sherer, 1946.

Paul T. Granlund is recognized as a premier sculptor throughout the United States and abroad. His figurative bronze sculptures are enjoyed in private homes and in public settings from Minneapolis to Sydney, from Paris to Hong Kong. For the past 20 years, Granlund has lived and worked in St. Peter, MN, where he holds the position of sculptor-in-residence at Gustavus Adolphus College. Several books have been written about his work. 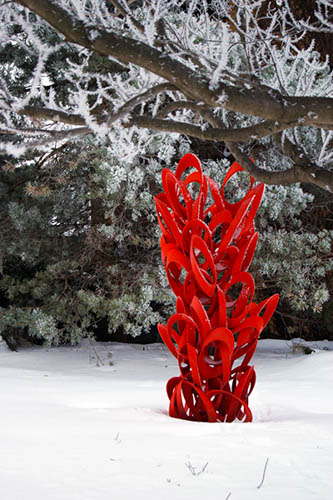 Liberman is best known for his monumental scale outdoor sculpture in metal such as Torre II. His early works, composed of discarded boilers cut with blow torches, have evolved into sliced columns on a smaller scale. He typically paints his metal sculptures a reddish orange to accentuate the form of the works.

Presented to Upper Iowa University in recognition of the unique teaching skills of Dr. Raymond C. Deming, professor of mathematics and registrar, 1922-1953.

Alexander Liberman is an active sculptor, painter, photographer and printmaker, and was until last year editor of all Conde Nast publications. It is probably his monumental scale outdoor sculpture in metal for which Liberman is best known.

Alexander Liberman was born in Kiev, Russia in 1914. He divided his early school years between Moscow and London and later studied in Paris. During his extensive travels, Liberman was exposed to the work of many artists and developed a keen interest in all of the arts. Liberman’s mature work was clearly influenced by his early contact with the School of Paris and Constructivism.

Alexander Liberman’s first outdoor scale sculptures in the 1960’s were composed of discarded boilers, a basic cylinder form which he was able to “cut” with blow torches. His later works, although no composed of inductrial materials, recall this form of sliced columns on a smaller scale. He typically paints his metal sculptures,most often in a reddish orange color to accentuate the form of the works.

Several years ago, Liberman said of his ow work, “Even the most monumental sculptures that you see are really throws of chance. Many of the cylinders that are in the air are really thrown in the air, literally assembled by me on a tentative emotional principle.” Despite this seemingly nonchalant attitude, Liberman carefully plans works before executing them in outdoor scale, either by making maquette or detailed plans.

Alexander Liberman’s solo museum shows include a 1970 retrospective at the Corcoran Gallery of Art, Washington, D.C. and the Museum of Fine Arts in Houston; a 1977 retrospective at the Storm King Art Center in Mountainville, New York; and a 1985 exhibition at the Fort Worth Art Museum in Fort Worth, Texas. He has regularly has one person gallery exhibitions worldwide since 1960, including 18 with the Andre Emmerich Gallery since 1967. 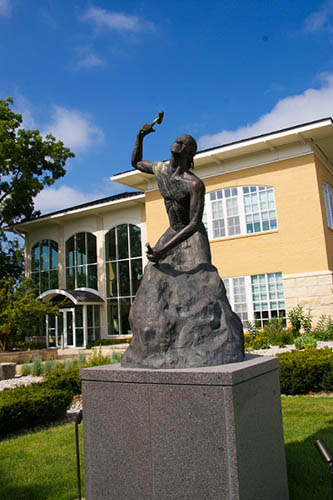 This bronze work depicts the selfmade man in his struggle to chisel himself from common stone. Blindfolded, The Entrepreneur must trust his instincts. His hand is battered from misplaced strokes of the hammer, constant reminders of his own mistakes. Not knowing if the next strike of the chisel will cut himself off at the knee or allow him to move further toward his goal, he continues unimpeded by his mistakes. 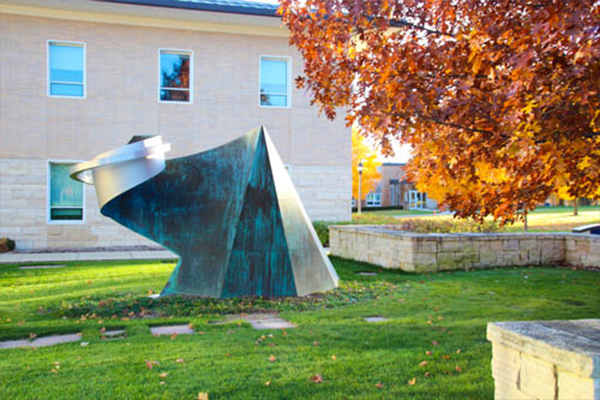 Commissioned for Upper Iowa University, Woodward’s 15 foot-wide sculpture of stainless steel, copper and aluminum represents a nautilus form. Inspirations for the piece were drawn from the University’s green goddess statue and the tornado that altered the campus landscape in 1971.

Presented to Upper Iowa University in recognition of the dedicated work of William F. Hall, supervisor of buildings and grounds, 1922-1955. 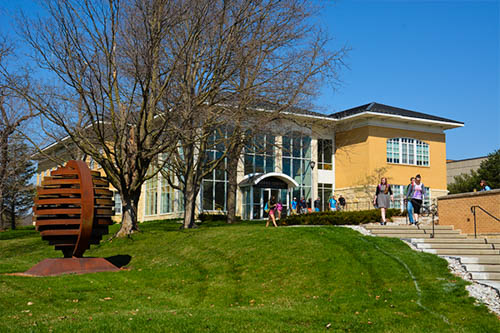 Concentric is part of an entire body of sculpture whose focus is on space and light. As the halves mirror one another, there is an interesting juxtaposition of negative to positive when the piece is viewed from different angles. Natural light plays through the piece, as well as within it; the shadows become a part of the sculpture.

In the words of Mark Stasz, the sculptor, “Sculpture is, for me a challenge I present to myself in terms of form, line, space and balance. Working with the materials I do-steel, bronze and stone-enforces the idea that the form itself is what is so appealing. The work overall is visually simple, but technically it is extremely complex. While some collector’s know and understand this, to others it is not important. In this way it gives the work a duplicity, something which I strive to attain in each sculpture I create. “Concentric is part of an entire body of sculpture whose focus is on space and light. the way in which each half ring defines an area of negative space reinforces the presence of the positive space. As the halves mirror one another, there is an interesting juxtaposition of negative to positive when you view the piece from different angles. natural light plays through the piece, as well as within it; the shadows become a part of the sculpture. With directed light, the positive and negative spaces become increasingly apparent and become the focus of the piece. With “Concentric” there is an additional tension, on that is often found in my suspended works. the tension comes from proximity of each half ring to one another in their same half, and to one another across the dividing space of the two half circles. With the previous works, where tension plays an important part, it is usually because of the suspension of a stone. It was a surprise to be able to create that same feeling and energy within the sculpture without having to break the symmetry and balance of the overall composition.” 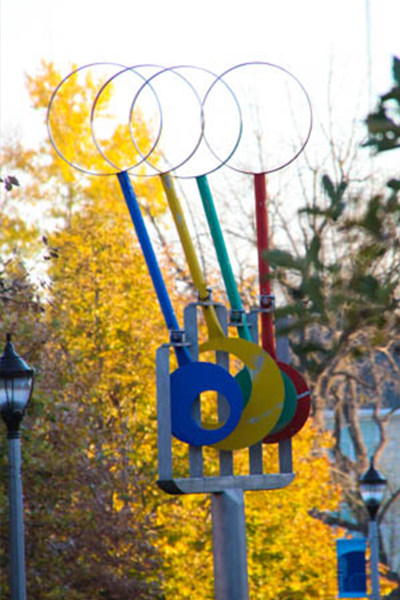 This sculpture reveals Stillman’s passion for working with Kinetic sculpture, and the study of slow motion with different geometric and organic shapes relating with each other. The shapes pass over each other, creating different positive and negative images and space, with ever-changing combinations. 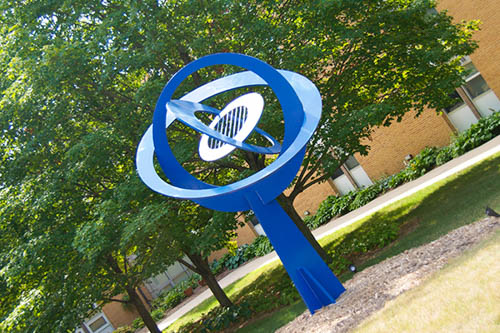 The sculpture executed in blue steel, is a series of interlocking ovals and stands 12 feet high. It is the last work created by the sculptor, whose death occurred shortly before the installation of Involution III. The piece evokes the concept of involution, which is defined as “the act of enfolding or entangling, an involvement.”

Presented to Upper Iowa University honoring New Jersey financier David Bolger, longtime friend and supporter of both the University and the community of Fayette.